This Summer we have more to celebrate, than we could ever have hope for. From the great sporting fixtures of 2012, starting with the London Marathon last month, and culminating with the Great North Run in September (in which several ladies from Roman & Roman at Home will be running). With F1 Racing and Football also taking centre stage, alongside the Diamond Jubilee Celebrations for Queen Elizabeth II. 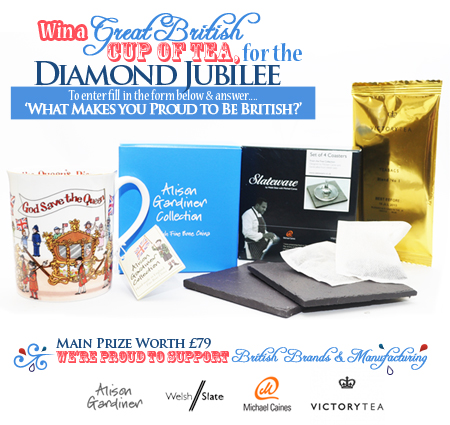 We couldn’t let the Diamond Jubilee pass without the opportunity to give one lucky person the chance to win a truly British Cup of Tea. To make the perfect British Cuppa you need: an Alison Gardiner Diamond Jubilee Mug, a perfectly British blended Victory Tea teabag and a beautifully natural 100% Welsh Slate Coasterto pop you fine bone china mug on, between sips of your cuppa.You can win:

How? By telling us: What Makes you Proud to be British?’.

10 runners up will also receive a sample pack of Victory Tea to enjoy… and every entrant will receive a special discount code to use on Roman at Home for just taking part!

To celebrate the start of this Great British Summer we’ve launched our Best of British Range of Homewares. Proudly championing: British Made, British Inspired and British Designed products and manufacturers.

Email us your school, trade, sport or national event for our list to bestofbritish@romanathome.com!

As the weather has now turned to rain showers and hail storms, maybe we need to think about adding some practical elements to our…