Since my last decorating diary entry, Scott and I have been very busy. Not only have we decorated the bedroom  but we’ve also hunted out some bedside tables and lamps that were a real bargain. 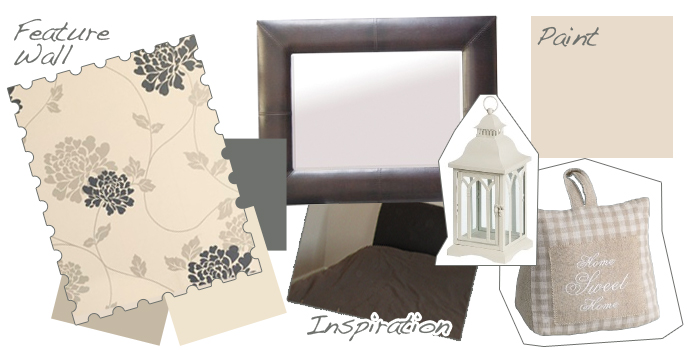 Our Saturday was taken up with the paintwork. We started off prepping the room by putting masking tape down where the skirting boards meet the carpet, to protect our nice cream carpet. Next the dust sheets went down so we could get cracking with the gloss work. By the looks of it, the gloss work has never been done since the house was built. So it did take a couple of coats to get them looking fresh. It’s amazing to see the difference – the door and skirting boards had looked white to me, but when you see them with the fresh paint on, you really notice just how faded they were. Once the gloss had dried, it was on with the paint.

We had been hoping we could get away with one coat, as the base colour the previous owners had chosen was pretty neutral. Unfortunately – not to be! We managed to do it in two coats of the Dulux Almost Oyster though, so not the end of the world. It was only when we were halfway through the painting we realised our big mistake – we hadn’t done the ceiling! So all the paintwork is looking lovely, but the ceiling is looking grim…doh! We both agreed, no point worrying now, we’ll do the ceiling another weekend.

On the Sunday I had arranged for my mum to come round – as an experienced wallpaperer she could instruct us (by us, I mean Scott) on how to wallpaper (I took the roll of assistant in this task as Scott is the handy one). She instructed him on how to put his first strip up and this certainly proved the most difficult one to get up. We started from the corner and getting the wallpaper to line up with the guide rope was not easy at all. It took a lot of lifting the wallpaper on and off, then laying it down bit by bit. Once it was eventually straight, it was then quite awkward cutting the long side off so it would fit perfectly in the corner. Scott had been keen to use a Stanley knife for the cutting, however my mum advised him against – she said scissors were better because the Stanley knife would cut too straight, so it would look more obvious where the walls were not totally straight. The scissors line would be less defined so the paper would blend better at the walls edge.

Once Scott got the first piece on, my mum explained how to match it up – we had quite a large pattern so there was quite a bit of wastage at the top…and then there was then a bit more wastage when we managed to rip a whole strip (ooops). We did begin to worry that the two rolls would not be enough (I could see a mad dash to Laura Ashley on the cards). My mum assured us that we would be fine as long as we were more careful. Anyway the second strip involved working round a plug socket. Because our bed would be positioned against this socket, my mum said there was no need to take the socket off the wall, that trimming round it would be fine, as nobody would see this part anyway. Once Scott had done the match (which also proved quite fiddly and difficult) and got the paper on, he then cut out the plug socket and the second strip was on. With that, my mum left us to it and the 3rd, 4th and 5th strip went on smoothly (pardon the pun!) and quickly. As my mum predicted, there was no need for a third roll. 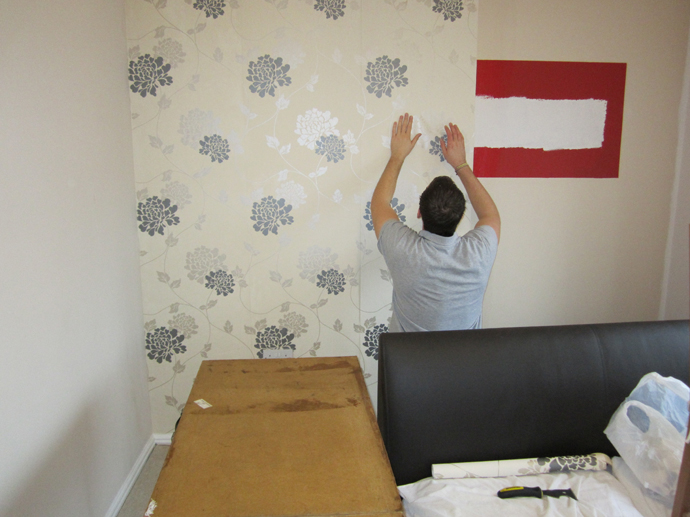 I must admit I was surprised at how much wallpaper paste you put on and at how much you can handle the wallpaper, lifting off and putting back down, then lifting off again and so on, without it becoming damaged. I did get a top tip off my mum. Instead of buying a guideline, just use a bit of string and tie your scissors to the end – this will weight the line so you can judge whether your wallpaper is on straight, but also ensures you never lose your scissors and they are always close at hand.

We got the wallpapering finished in good time so had all of Sunday afternoon free. We decide to head out and see if we could get some bedside tables and lamps and headed to the Barker and Stonehouse sale. I had in mind that I wanted some feature pieces of furniture as the room is quite small and bear. We managed to pick up two bedside tables that were ex-display, therefore better than half price. They we real solid wood cabinets and were also made from sustainably sourced wood…excellent…we could feel guilt free and a bit smug with ourselves – a bargain and green! We then picked up some feature lamps in the Homebase sale. 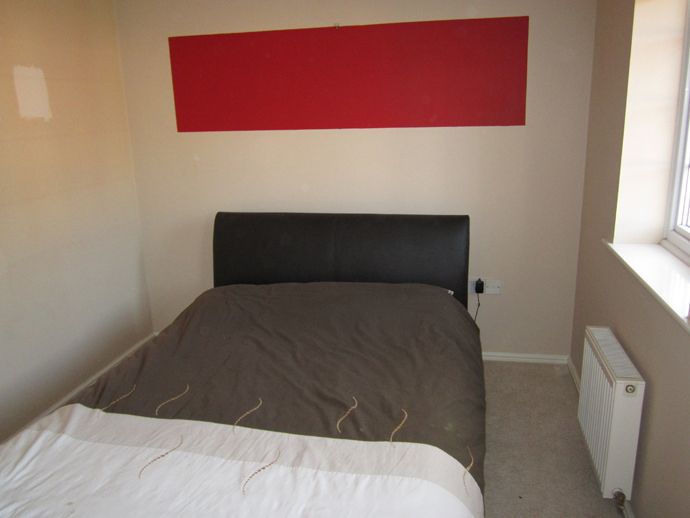 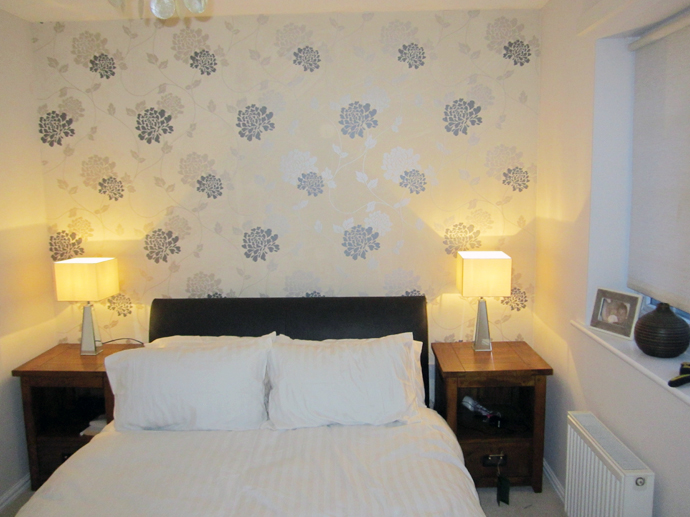 Now we just need some finishing touches for the room (as well as to paint that dreaded ceiling – but shhhush, don’t mention that). We will of course be able to get some nice bedroom candles from Roman at Home, I particularly like the Wax Lyrical Candles as they come in a jar with a lid, so the fragrance stays strong. I’ll also get the Blissful Sundays Reed Room Diffuser, to keep the room smelling fresh. The only other bits and pieces we need now to finish the room off, is some soft furnishings. My aim next weekend is to pick up some curtains and cushions in a bluey/charcoal colour to match the print in the wallpaper. Wish me luck, so far I have seen nothing in this colour!