Earlier this week my dad called round with some vegetable from his garden, in amongst them was a giant courgette, which looked more like a marrow from the size of it! It was big enough to feed us for a week. With this as real vegetable inspiration I thought I’d try something new and go vegetarian for the evening. Here’s how it worked out… 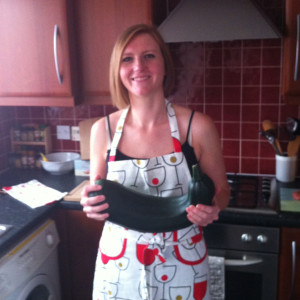 I looked up a few different recipes online with courgette as the main ingredient and liked the look of a Courgette, tomato & gruyère gratin which I found on the BBC Good Food website. I thought this would make a good starting point, but I would adapt it to suit my own taste.

I’m not a huge fan of Gruyere Cheese, so I substituted this for Cheddar and went for a half fat version, to be a bit healthier. I also dropped out the use of olive oil in favour of olive oil fry light (there’s enough fat in the cheese, without adding in extra). Alongside the ingredients suggested by the recipe, I was keen to include a few of my other favourite vegetables such as peppers, mushrooms and onions.

Here are my ingredients 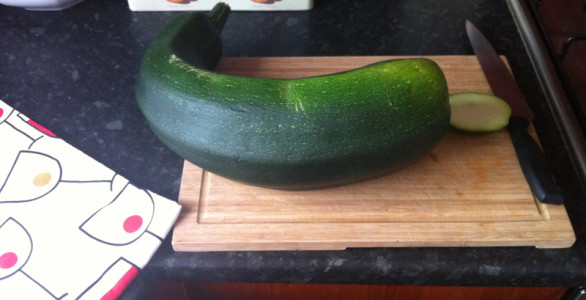 Our Commercial Director, who is a vegetarian, gave me a useful tip – he suggested roasting the courgette first, before adding the sauce, so this is how I began. 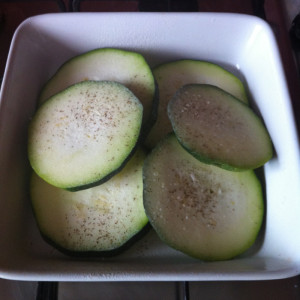 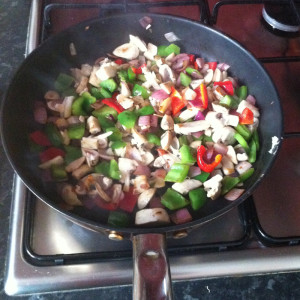 For the sauce I stir fried the onions until soft, added the peppers and mushrooms and cooked for a few more minutes. I then added the garlic (I’m a big fan of garlic, so I upped the recipe suggested amount from 1 clove to 3!). 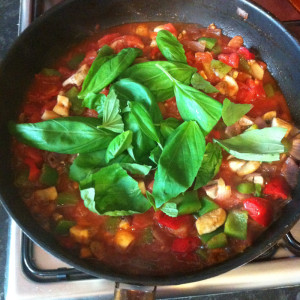 After cooking with the garlic for a few minutes I added a tin of chopped tomatoes, the basil leaves and seasoned with black pepper and salt, then stirred and left to reduce down.

Whilst the sauce simmered I removed the courgettes from the oven and turned once. I again seasoned with more black pepper and placed back in the oven. 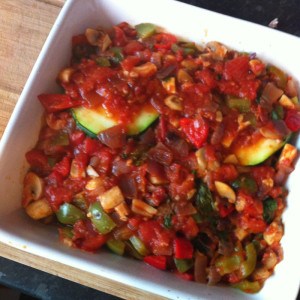 Once the courgettes had begun to soften, I lifted them out of the oven and added the sauce over the top. 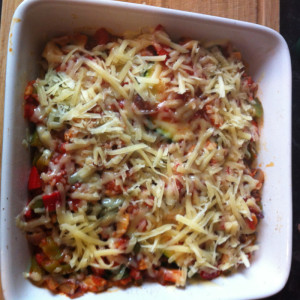 This was then topped with the grated cheese. I covered in tin-foil and placed back in the oven for 25 minutes, on 180°C. After this time I removed the tin foil and returned to the oven for a further 15 minutes. 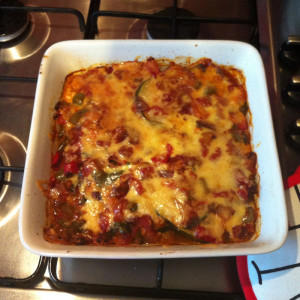 I served mine with salad, but it would also go well with crusty bread, potato wedges, or even on top of pasta.

The Verdict – super tasty and filling. My only comment would be the cheese went a bit rubbery, but I think this is probably because I used half fat. Next time I would go for mature cheddar and use less, to keep the fat content just as low, but still giving the same flavour impact.

Don’t forget all your essentials when going to University, here are some items which could be quite useful for someone starting university this year….